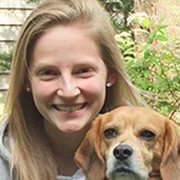 My name is Courtney Cox and I am a senior majoring in Neuroscience with a concentration in Cellular and Developmental Neuroscience. Although it feels like quite a while ago, I still remember the decision making process for choosing a college very well. In this entry, I will be sharing with you a little bit about why I personally chose MSU and what my four years here have looked like. I hope that in some way it helps to encourage you as you decide.

“The fort and castle toy set are all the way downstairs in the basement. It’s early, too early for my parents or my sister, but I want to play, just for a little bit, and I won’t have to share the cavalry horses if I’m alone. If I’m slow enough on the steps, they might think that it’s Grandpa up and about. I crept down the stairs trying to go as slow as I remembered the adults always going. I needed to go to the left; the tile hallway wouldn’t be as loud and I wouldn’t have to cut through the kitchen. Wait, I could smell her – Listerine and ivory soap. She was already up, sitting in the kitchen on the oldest and most uncomfortable antique chair in the world, with a crossword puzzle my grandfather would have to help her finish, and a glass of tap water on the table with coffee brewing in the corner – the brain is phenomenal, isn’t it? It can instantly recall an entire memory from a single smell, even the ones that you’ve forgotten you had or haven’t thought about in years. As I screwed the black plastic cap back onto my Listerine bottle this morning, I tried to focus again on starting the day. She always smelled like Listerine and ivory soap – always.”

I wrote that journal entry on my second morning in Auckland, New Zealand almost four years ago during my Freshman Seminar Study Abroad. I had been brushing my teeth before we were heading out for the day, and I realized that I still had a very clear memory of being in my grandmother’s house associated with the smell of Listerine, even when I was on the other side of the globe.

The first time that I became truly interested in the brain I was watching it fail. My grandmother was diagnosed with Alzheimer’s disease in 2006. For a long time, she didn’t look sick, but if you tried to talk to her, you knew she was. This could probably be said for any aspect of our physiology, but we tend to notice how incredible the brain is once it’s no longer working the way that it’s supposed to, and as difficult as the situation can still be, my grandmother’s disease was a part of what sparked my interest in what I would end up studying here for four years at MSU.

At the time that I was college searching, I knew that I loved learning about the brain, especially from a biological perspective, but I also knew that I had wanted to look into to veterinary medicine for a very long time. As I went on tour after tour and visit after visit, there was something about Michigan State that kept sticking out. On top of the highly ranked study abroad program and breadth of undergraduate research, it became clear to me that this was a university with a lot of opportunity. If I was going to find a way to combine neuroscience and veterinary medicine, MSU seemed like one of the few places that I would be able to do so.

After being accepted into the Lyman Briggs residential college and a freshman seminar study abroad program, I made my final decision and came to MSU. As a student in Lyman Briggs, I would have the opportunity to be in a living-learning community at MSU, which would offer smaller class sizes and a residence hall with other students majoring in a science degree. It made MSU small where I needed it to be small, while still allowing it to be a BIG 10 research university. So, I could go to a football game with 800 other Spartans on Saturdays, but learn about triple integrals with 30 Lyman Briggs students on Mondays and Wednesdays. Then, interestingly enough, within my first 10 weeks on campus, it was announced that Neuroscience had been approved as an undergraduate major. And, even though it was a very uncommon choice for a pre-veterinary student, I declared it as my program of study.

I think it could be easily said that the brain is one of the most complex things that exists – it is incredibly fascinating and diverse, and the courses for the Neuroscience program completely reflect this. My introductory courses covered the “basics”, understanding broadly what we currently know about the brain, and what we need to understand at a foundational level in order to start asking harder questions, spanning from molecular mechanisms and voltage-gated membrane proteins to visual processing pathways and memory consolidation. Once I was in my upper-level courses, I got the opportunity to go even deeper and because of my concentration, I was able to do so within an area that was personally interesting to me. There are multiple ways to approach the brain, but I knew that I was most interested in a molecular, biology-based method. Through my concentration courses, I have been able to study the brain in depth from an angle that interests me, learning about the ion channels in a single cell, which are complex enough not only to found a full semester course, but an entire field of neuroscience research. I’ve also learned about how the brain develops during embryonic and adolescent stages, as well as the molecular mechanisms underlying drug addiction and multiple neurobiological diseases.

On top of the interesting and diverse course options, I was also given a group of extremely accomplished and caring faculty. I never felt like a number in this program, and I will always be grateful for the intention and concern extended to me by my professors, especially as one of two pre-vet students in the program. To have instructors that were so encouraging toward my individual interests, but also open to helping me explore the best post-graduate options for what I wanted to do, was really special for me.

In addition to my neuroscience courses, MSU also provided me with multiple opportunities to get involved in the undergraduate research on campus. I have worked in three different labs, two of which I am still active in. The first lab I worked in was through the psychology department. During my freshman and sophomore years, I worked on a transcranial magnetic stimulation (TMS) study which was assessing the role of the supplementary area (SMA) in internal beat generation and beat perception. I was also involved with an electroencephalography (EEG) artificial language study, and I am currently helping with data collection for an NIH-funded study focusing on speech understanding in noise. I have presented posters for that lab at the University Undergraduate Research and Arts Forum (UURAF), as well as a smaller conference at Indiana University and the Society for Neuroscience (SfN) annual meeting in San Diego. I started working in another lab this past summer in order to gain more experience with cellular research techniques in neuroscience, working with animal models, tissue fixation methods, and cell staining and counting. I have been working with a graduate student to determine the effects of brain derived neurotrophic factor (BDNF) on motor neurons in the spinal nucleus of the bulbocavernosus (SNB). We are working with a new transgenic model that overexpresses BDNF in the target muscle using a Cre-Lox recombination system in mice, and I will be presenting a poster for this lab at UURAF this spring before I graduate.

Along with all of my neuroscience interests though, I was still pre-vet and my major actually ended up increasing that interest instead of changing it. I work at an avian, exotic, and small animal clinic, and completed a semester-long internship at Potter Park Zoo during my junior year. I got to work with a rhino there that experienced regular seizures, and I gave a case-study presentation about him in one of my upper-level neuroscience classes. I will be starting veterinary school here at MSU this coming fall, and although I don’t know if I will further my neuroscience experience through a master’s/PhD program or residency, I look forward to the opportunities in which I will have to apply it and will always be thankful as I look backward at what I was able to do through the Neuroscience program, Lyman Briggs, and MSU as a whole.