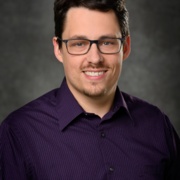 Dr. Michael Williams, Assistant Professor in the College of Human Medicine’s Department of Pediatrics and Human Development, studies the role of Autism Spectrum Disorder candidate genes in neuronal development. Changes to these candidate genes, such as inherited or de novo mutations in coding regions, have been implicated not only autism but also in co-morbid conditions including intellectual disability and epilepsy. To identify therapeutic targets and the causal biology in these disorders, Dr. Williams’s research informs the normal essential roles of these genes and the impact of patient-identified mutations on those functions. The Williams lab leverages expertise in viral and transgenic animal strategies to manipulate candidate genes in developing murine neurons in vivo ahead of diverse downstream assays ranging from biochemistry, to electrophysiology, to behavior. A major current focus is on candidate genes encoding receptors, effectors, and negative regulators of the PI3K/Akt/mTOR in neuronal migration, morphology, and synaptogenesis. However, the Williams lab is eager to work with those sharing an interest in neurodevelopmental disorders broadly defined, or with those seeking aid in the generation of novel plasmid, viral, or animal models of the same. Parties interested in consulting, training, or collaborating should contact the PI directly.